OK people, we need you to roar like you’ve never roared before.

The Daily Mail has used its front page to attack teaching unions. 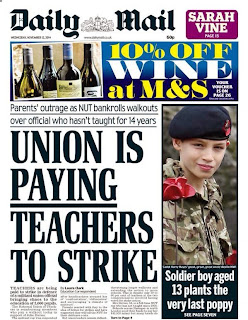 The NUT representative for Haringey in London is a woman called Julie Davies. She has ruffled some feathers locally both by representing her members effectively, and by supporting the Save Downhills campaign, which caused Gove and his goons no end of grief.

Now two head teachers have said that they will no longer accept Julie Davies as the NUT representative in Haringey.

When strike action is taken locally, rather than at national level, it is usual for that action to be ‘sustained’, i.e. the union concerned will use funds set aside for the purpose to ensure that members aren’t disproportionately penalised financially - as they are taking action over and above national action.

The NUT in Haringey is not “paying teachers to strike,” they are using union funds, set aside for the purpose, to defend the rights of all members. It is a clear point of principle that heads cannot decide who represents union members. The very idea undermines all teaching unions and that’s why it’s absolutely necessary for NUT members in Haringey to take strike action – they do so on behalf of all of us!

Here at TeacherROAR we are a huge supporter of all the teaching unions. They are the last bastion against the likes of Gove and have had considerable success in slowing down his ‘reforms’. We cannot allow them to be undermined in this way.

The Daily Mail are using this dispute, and twisting the truth, to further their agenda to damage and weaken the teaching unions. We need to show them that we will not tolerate this.

So what can you do to show your disgust at the actions of the Daily Mail?